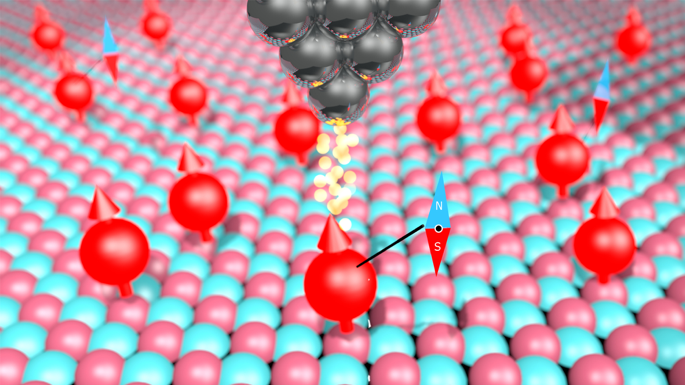 Braga, Portugal — A international collaboration, including INL researchers – Jose Lado (ETH, Zurich),  Alejandro Ferrón (CONYCET, Argentina) and Joaquín Rossier ( Theory of Quantum Nanostructures Group Leader at INL) – , have made a major scientific breakthrough by detecting the nuclear magnetism, or “nuclear spin” of a single atom. The experiments have been carried out by IBM Research at Almaden (California), in collaboration with the University of Oxford and QNS (Seoul). The researchers used advanced and novel techniques to measure the nuclear spin of individual atoms on surfaces for the first time.

Normally the nuclear spin, which describes the magnetism of the atom’s core, can only be detected in very large numbers. The findings, published today in the journal Science, show that this is now also possible for single atoms on a surface. To do that the team used a Scanning Tunneling Microscope, which consists of an atomically sharp metal tip and allows researchers to image and probe single atoms.

The two elements that were investigated in this work, iron and titanium, are atoms that can have a different number of neutrons in the atom’s core, these are the so-called isotopes. Only certain isotopes of each element have a core with a nuclear spin. It is normally exceedingly hard to measure nuclear spins of individual atoms. Traditionally large numbers of nuclear spins are required, making this advancement so noteworthy.

In order to detect the presence of a nuclear spin within the core of a single atom, the team made use of the hyperfine interaction. This phenomenon describes the coupling between a single atom’s nuclear spin and its electron counterpart, that is generally much easier to access. Dr. Philip Willke of the Center for Quantum Nanoscience (QNS), first author of the study, says: “We found that the hyperfine interaction of an atom changed when we moved it to a different position on the surface or if we moved other atoms next to it. In both cases, the electronic structure of the atom changes and the nuclear spin allows us to detect that.”

“This achievement marks a milestone in the history of nanoscience: the use of scanning probe microscopes to look inside the atoms, and obtain information at the nuclear scale,” says Joaquín Fernández-Rossier, leader of the INL team that has carried out the computational analysis of the experiments. “Nuclear magnetic resonance is routinely done at the hospitals, but it is only sensitive to a very large number of nuclear spins, limiting the spatial resolution to a few microns. The current experiment has carried out magnetic resonance imaging an area 100 million times smaller: just one atom.”

In the longer term, this could be used to store quantum information in the atom’s nuclear spin, that combined with the capability of scanning tunneling microscope to build structures atom by atom could help to fabricate small quantum computers. While still in early development, quantum computation promises to vastly outperform classical computers in tasks such as database management, search, and simulation.
“I am very excited about these results. It is certainly a milestone in our field and has very promising implications for future research” says Prof. Andreas Heinrich, Director of the QNS. “By addressing individual nuclear spins, we can gain deeper knowledge about the structure of matter and open new fields of basic research.”

Sketch of the setup. Single atoms are deposited on a surface of magnesium oxide. Some atoms naturally have a nuclear spin, a small magnet, in their core. They are imaged by the tip of a scanning tunneling microscope which also allows researchers to probe their electronic configuration.